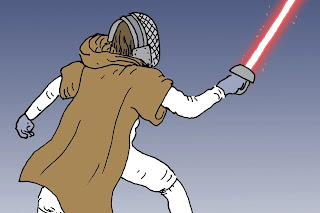 Over my time fencing I can think of a few amusing things I've encountered or used in sabre.

The coolest defensive sabre move is probably the jump parry-two. The Polish (or the sky-hook) is probably one of the cooler counter offensive movements, but the counter close out, or a resemblement pris-de-fer counter attack might be cooler.

For strange though...we have to dig deeper.

In college I was a fan of making a counter attack with a passata sotto followed by a parry five and riposte. Now you would make the same idea using what I like to call a “bunny hop” but what most people just call ducking...that crouching motion that you see in foil and epee sometimes. The passata sotto (ducking in a sort of reverse lunge with the off hand touching the floor for balance) was flashy and cool and esoteric in the minds of college kids I guess. You don't see it a lot now, it's probably one of those historical curiosities of fencing.

I guess, again, this was a counter-offensive rather than a defensive action.

When I took my first lesson at Salle Palasz it was with Coach's best friend, Ramon Mathews. He was in his late seventies or early eighties and had an intense dramatic flair. He used to dress up as Zorro for the kids at Halloween. The lesson he gave me was on the use of the parry six in sabre.

Prior to this, I knew what a parry six was. Basically a backwards parry five with the hand brought to the other side of the face. When it was first shown to me by another fencer in college I thought he was making it up. By the time I received this lesson, I knew it was real but just something people didn't really do.

Ramon taught me that if I had made an attack in four, and was parried, if my opponent collapsed the distance with a riposte to the head, I could take the parry six more quickly than a five, and probably more effectively than a four at that distance, and then riposte by rotating the wrist and dropping my tip.

This is a pretty unlikely action in contemporary electric sabre, but it can work. It's definitely a hold over from non-electric sabre and is basically an infighting option. But there might be some scenarios where it could get used if you were against someone who managed to force fencing that close, or against a tactical distance-close on the parry to eliminate the parry-counter-riposte option.

Another weird moment was the use of a parry seven. The parry seven is a parry behind the back in sabre. Coaches talk about it as the parry you would use as someone was passing you on horseback. I don't know if that's real or not, but until the early nineties passing in sabre probably happened a lot because fleching happened a lot.

I was not fencing when the fleche was still allowed in sabre. But, a few years back I was doing a sabre bout with a student. The student was a left handed foilist, he has now switched over to being an epeeist and has moved away to be a professional fencing coach. I'm not sure why he was fencing sabre with me at the time. At one point his instincts kicked in and I guess he tried to attack when he saw me make a preparation, and he made a fleche. As he was going past tried to hit, so, I made a parry seven and extended behind myself to hit him as he ran past me.

Super unusual. I've seen one other fencer do this one time in a similar situation. But only that one other time.

My favorite though was probably this last one.

I was on a team with a foilist and an epeeist. We were in a three weapon team competition. So each team had one fencer from each weapon, and you fenced a relay to fifteen. I'm not sure how the bracketing worked, but we fenced a handful of teams and eventually won the competition. My high school students crushed a team from a local college, which I assumed would be the team to beat my team, and then my team crushed my high school students in the final.

Earlier in the day though we were against a team from another local club, and their head coach was doing sabre for their team. He was a lot of fun to fence and is a super nice guy. He made an attack with a very low line, or maybe he was going for a counter attack. He was left handed, and so he was closer than I expected and the distance was closing. So I switched from attacking to parrying but continued forward and took his blade in two and then bound the blade continuing from the second position in order to score the touch on his back while still holding his blade with mine.

It sounds a little ridiculous but can actually be done with some elegance. It's another example of sabre taking an action that is essentially in fighting.

You can also support us through Ko-Fi. We appreciate you reading! 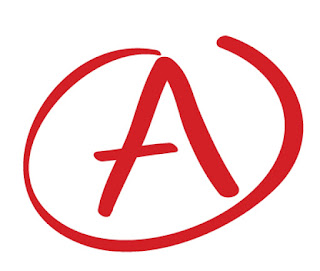 Posted by Coach BJ Swayne at 1:36 PM No comments: