NAC's As a Learning Experience 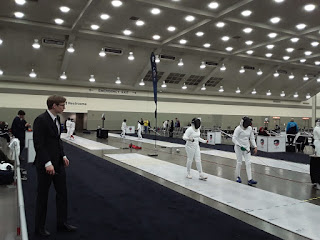 I was working on a blog post on why a fencer might consider going to a NAC or a Regional Circuit event even if they aren’t quite ready. I haven’t gotten through that post, but it seems reasonable to still take some time to talk about first NAC experiences, since our club has several fencers about to go try their first NAC.

It’s fine to be a little nervous before a big event, especially when it’s your first time. That’s one of the reasons to try out an event like this when it’s close by. Traveling across the country, when you’re unsure if you’re ready, when you’re nervous, and when the competition environment is wholly different from anything you’re used to can be a lot of mental pressure to tack onto the pressures that are already there in a big competition when your parents and coaches, and maybe you yourself have expectations regarding your performance. It can also be a pretty expensive commitment when you’re just trying to see how things will go.

I once had a fairly successful teen athlete advocate to his younger team mates that they always take time for a warm up bout because your first bout of the day will very possibly be your worst. Maybe not the worst result, but very possibly your worst performance. You’re not ready, you’re not loosened up and used to moving, your mind isn’t set to fall into the reflexes and choices it associates with fencing. Using a bout that you need a good result in to get the ball rolling isn’t a great plan when you can grab a few bouts that don’t count for anything as part of your warm up.

The same can be true as we step into new levels of competition. If we have the opportunity to get used to that kind of competition, to learn how to navigate the bigger venue and larger competition environment before we go to an event where we’re looking for a particular result, we have the same sort of “warm up” opportunity.

This might seem like an expensive warm up, and it might seem like your performance at the event will be indicative of how good or ready you are, and therefore how well you’ll do at subsequent events. These things might make it seem less reasonable to do. Considering the first point, more than a warm up you have the overall experience. Competition in that context is very different from competitions in the local context most fencers are used to. The space is larger, there is more to navigate. Strips are divided into pods which are sectioned off. Parents, and fencers not fencing have to wait outside of the space of the strips. Referees have a higher expectation of the fencers being prepared to hook up and follow directions quickly. The fencers with whom you’re competing are often “stronger’ than many of those who only do local competitions. Announcements about where you’re supposed to be are delivered differently (currently primarily through the Fencing Time Live website, but sometimes through large TV screens or postings in central locations.) Regional events have some similar elements – larger more formal check in, using armorers to check weapons. There will be numerous vendors, historical displays from the USA Fencing Hall of Fame, fencers gathering their bags into groups with their teams, people everywhere filling a convention center hall. It’s full immersion into a massive fencing environment, and it’s like a sea you can get lost in your first time out. It can be exciting and fun, but it can also be overwhelming if you’re nervous about competing.

Once you’ve done it though, the experience is different. The environment is familiar and expected. It’s a matter of returning to this cool thing you only get to go to sometimes. You can go in more comfortably the second time. Better than that though, fencers who start to get used to fencing national events begin to find other events easier. The stress of competing in a local event or a regional event fades away because now these are your small and midsized events. They seem easier and simpler than a large scale national competition. That alone is a big benefit.

As for the second point, of whether or not your performance the first time out is indicative of future performances…well, hopefully for any tournament you’ll improve with future events. Hopefully, you’re practicing and training and so future events in general will be easier. Going to a national event has some added elements though. As we said, you’ll probably be more comfortable and familiar with what you’re walking into the second time, so that can help. Another big thing is seeing more of the range of what’s out there and what successful national circuit fencers look like. You might see some ideas to go back to your club with and ask your coach about learning, but the big take away is frequently less about style and more about athleticism. Fencers competing at that level are fast and strong, they are clearly athletes. Competing in that context often works to drive that point home much moreso than local competitions would. Fencers walk away with a better idea of what they need to be in order to be successful. As coaches, we try to communicate the important of strength, speed, agility, balance, and the various traits that comprise “athleticism,” and fencers hear it, but seeing it and experiencing people who have it helps build a clearer deeper understanding.

Speaking from experience, I’ve seen a lot of fencers who have gone to a first NAC and not won any bouts. Some fenced their best, some recognized they weren’t mentally ready and could have fenced better. Some were happy with how they fenced despite results, some felt like they could have done better. In most cases, they’ve done better the next time. I know a B-rated fencer from another club who fenced his first NAC and won no bouts, but then went 3-3 in his pools at his next NAC. I know another fencer who lost all his bouts his first NAC, but then almost earned Junior National Points in his second NAC. I’ve seen a lot of fencers with stories like this. Some low rated fencers, but also several As and Bs who went into their first NACs and won no bouts, or won one bout, and then did much better their second or third outing.

Competition is always part of the training experience. Sometimes we leave competition out. But if we want to be competitive and do competitions, going to them is part of preparing to do well in them. This is true of local competitions, but it’s more true of large competitions. Practices and lessons alone can’t simulate some of the elements of competition. At all levels, early competitive experiences…and even on-going ones…are part of our stepping stones towards success.

There are also fencers who have stand out, great experiences their first NACs. We don’t want to write off that possibility. Even if you’re going in just to try it, or you’re going in nervous, try and stay relaxed and do your best. You might surprise yourself. Sometimes we are more ready for things than we think we are. Sometimes we do well with those pressures in place or in new situations. Reminding ourselves that there is a reason to go give it a try and to feel good about our efforts even if it doesn’t look like there is an immediately apparent result doesn’t mean we shouldn’t go and try and do our best. We still need to be open to the possibility of having a great day and performing well. We just want to remember that if that’s not how the day goes, it’s part of a process and it’s getting us closer to where we want to be.

In the end, what we want is to stay calm and clear, stay focused, make a good effort and walk away having had fun with a new experience that teaches us more about how to become successful competitors and how to meet our long term fencing goals.


- Even if you don't feel ready, have fun and do your best, it may go better than you think

- NACs are a big experience, when you're new to them, feeling nervous is normal, the next one will be more comfortable

- Tournaments are part of training for success in future tournaments


- Warm up bouts are necessary, when moving to a bigger type of tournament, a “warm up outing” might be necessary too

- NACs can be a learning experience, look at the overall traits and athleticism of the people who do well and see what you can learn from that

- A lot of people, even high rated fencers have a bad first NAC and then do much better at subsequent ones

- Have fun, do your best

Thanks for reading!
For more updates like this, and ideas, thoughts, and items of interest for fencers, coaches and parents, follow us on Facebook and please share us with friends and team mates!
You can also support us through Ko-Fi. We appreciate you reading!
Posted by Coach BJ Swayne at 10:40 AM 2 comments: