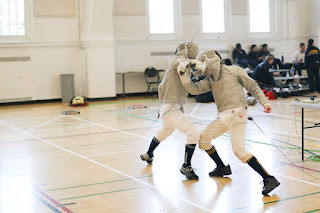 Recently I was listening to an older fencer talk with a younger fencer. He asked the fencer why he was doing something he was doing. The fencer gave an answer, and honestly, what he was doing was not the most adaptive choice he could have been making. The older fencer responded that the kid wasn’t wrong in his choice because he scored the touch so it must have been right.

Later in the night I was giving a lesson and the athlete I was working with commented that when he kind of follows instructions he can sort of make the action work, but that it seems more solid and consistent when fully follows the instruction. This should kind of be obvious, the more correctly you do something, the better the result.

My response to him was something along the lines of “You’re at a point where almost right isn’t good enough.”

Thinking about it later made me think on the two different approaches to the idea of an error. Both students could score with what they were doing. One would continue his error because it worked in practice, the other was going to fix it.

The student continuing the error will eventually find that against a more serious opponent or a better opponent, the bad choice won’t work as well. The student working to improve his mistake will have a tool he can use in a broader number of scenarios than he can use now.

A tough thing with recognizing that we have to do things right even if the wrong thing works is that sometimes our mistakes get rewarded and our efforts to correct how we make an action get shut down.

In a bout a student might do something ridiculous that scores because his partner does something poorly or ill chosen. Or it might just be too weird for their opponent to figure out how to stop. A student recognizing an error and trying to fix it might think he’s fixed it and might just be fencing a better opponent, or someone who knows how to stop that action, or someone who gets lucky with a weird touch. They might take steps to fix their action and the steps might just not be enough to fix it…yet. Not scoring might reinforce not using the action or not making the correction, and so sometimes we have to help illustrate the incremental improvement, or how the execution is better even if its not yet successful.

On the flip side, sometimes we have to make the awkward choice of explaining that something was not a good choice even when it seems like it worked. Students don’t always get this when it’s explained because the positive reinforcement from scoring is stronger than us telling them otherwise. Even if we show them that the mistake loses against a better executed response, the positive reinforcement of scoring is stronger than the positive punishment of getting scored on. So if we let the mistake go long enough it can be tough to extinguish it.

A helpful element in this is if the student has a cohort of teammates they’re close with and they all have a sense of what the right way to execute the actions are, even if they can’t all consistently do them. Not only do they help remind each other to correct errors but having that culture of being committed to correctness allows the students to focus on it themselves as well. When they begin to correct themselves as soon as they notice the mistake it can help get them on track before the error is reinforced.

While having some sort of negative response to poor execution isn’t necessary, I’ve had college students who would assign themselves push ups if they realized they were executing actions incorrectly. I’ve had youth fencers successfully extinguish some basic errors in their teammates with the same approach. Self-directed and peer directed correction can be pretty powerful and offset the strength that reinforcement through scoring with the wrong choice would otherwise have.

The biggest piece of this though is just instilling a sense of the importance of correct execution and the broader success that it will lead to. That said, students still need to understand that once they have it right then they have room for personalization and innovation.