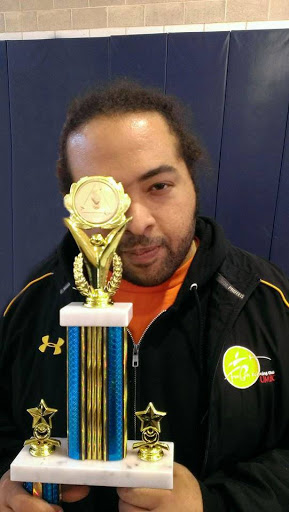 Recently USA Fencing reached out to ask me some questions for Black Business Month. They posted a nice write up on Instagram summarizing some of what I had to say. I spoke with some of the board members from my club and they agreed it would be good to post my full interview here.

I'm happy to answer your questions, with a couple preliminary clarifications. Tri-Weapon is run by a non-profit board, of which I am one of the key members, and I am the main coach for Tri-Weapon in addition to being on its board. So I'm not a club owner, as we don't have a club owner, but I'm one of the three main decision makers/organizers on our board (which covers three programs), and am the main person working with Tri-Weapon. Additionally, in covering club leadership of color, I should clarify, I am biracial. I do a lot of advocating on social media against the erasure of biracial people. Biracial experiences are very different from the individual ethnic experiences of the particular groups which make us up, but recognizing us as ourselves is also an important part of recognizing diverse voices. If you can include me in your highlighting of clubs in that context, as a biracial club organizer and coach, rather than as a black club owner, I am more than happy to be included.

1. How long have you owned Tri-Weapon Fencing Club?

As I mentioned, I'm a board member and a coach for Tri-Weapon Fencing Club. I've been on the board since 2011 when our Coach, Richard F. Oles passed away. The board was established because Tri-Weapon was the longest extant non-collegiate fencing program in Maryland and the family and fencers wanted to make sure that there was always a group of people to protect its existence.

2. How long have you been the coach at University of Maryland Baltimore County?

I began coaching at UMBC in 2006 after having fenced on the team there. I became the head coach in 2008 and have been since then.

3. Why did you become a club owner (what was your path to becoming one)?

My friends at UMBC sometimes joked that the most likely way for them to continue fencing after college was if I opened up a fencing club. It was at that point that I considered I might someday become a fencing club owner. When I joined Salle Palasz, the club for adult fencers which was run by USA Fencing Hall of Fame member, Dick Oles, I got to work with some of the Tri-Weapon boys. Seeing the environment there furthered my desire to someday run a fencing program outside of what I was already doing at UMBC. I imagined I'd work under Coach for a few more years, maybe study under some other local successful coaches as well, and then eventually find a space to open a club, probably after Coach retired, or possibly look for a way to continue Tri-Weapon after Coach retired. Unfortunately, fate had other plans, and during a blizzard in January 2011, Coach drove home from practice, a practice none of us showed up to due to the blizzard. His car broke down, and after AAA towed him to a nearby mechanic he chose to walk home. A young man driving a snow plow hit him, and left him on the side of the road. I found out the next evening what had happened. A few other local club owners called me that evening, possibly hoping to bring me in to help them absorb TWC. Fortunately Coach's nephew Mike, a former Junior Olympic Champion, stepped up along with Coach's niece Kathy and saved the club. They gave me the opportunity to step up my involvement and work with Tri-Weapon to help continue it, develop it and grow it. My involvement with Tri-Weapon has helped me deepen, organize, and formalize my approach to coaching UMBC.

4. What do you see as the importance of being a Black club owner?

I think fencing is a space which many people assume is for wealthy white athletes. Internationally we see some diversity with the growth and success of Asian fencing programs, but throughout Europe there is not a ton of diversity in fencing. The United States, however, has a long history of diversity in fencing, with Olympians, coaches, athletes, and USA Fencing officers of all racial, ethnic, and religious backgrounds. I think having a diverse field of club owners, organizers, and coaches lets people know that this is a sport for all people, not just one group. Coach tried to keep fencing available for everyone; he was reticent to raise prices even when he needed to. We have tried to keep our set up streamlined, accessible, and affordable, so anyone who wants to can fence, just like he did. I think that is a super important guiding principle: fencing should be accessible to anyone who really wants it. I don't think that principle is one which is race driven, but I think an inclusive and diverse leadership in the sport sends a message which is welcoming to young athletes who might question whether or not they belong. I think regardless of the race of the fencer or the coach, it's important that we make sure young athletes know they belong and that they are valued parts of a club community. Growing up biracial has sometimes put me in contexts where the environment in which I felt naturally inclined or in which I should belong did not always include other people who looked like me. Even when we're told a place is a safe space, or an inclusive space, if we can't see that with our eyes it can be a big step to take the leap and try it out, or to feel like people aren't questioning why we're there. Inclusion at all levels helps prevent those feelings for everyone and erases the divisions which would otherwise push our attention towards messages of inclusiveness - which sometimes feel forced and artificial. Diverse leadership, when it occurs naturally, lets us live inclusively instead of just talking about how to include others.

5. What makes your club unique?

Tri-Weapon is part of a group of clubs. We have TWC, which is a boys club for youth athletes, FIA, which is a girls club for youth athletes, UMBC which is a college club team, and Salle Palasz, which is a general club for adult fencers. We provide community on a level which sets us apart from a lot of the clubs in the area, so much so that other parents and coaches have sometimes mentioned it. We create space for competitive and driven athletes as well as casual recreational fencers and the gamut in between. We provide a scout like club environment for boys and a similar environment for girls, where they have their own spaces for work with their peers. We also have on going programs and opportunities where the boys and girls still work together, and where they work with the college and adult athletes. We create leadership opportunities within their individual sub-programs, but also encourage the youth athletes to take charge and teach and lead the less experienced college and adult athletes. This is a super empowering moment for a kid, once they get past the initial nervousness of taking someone much older than them, and telling them what to do and how to do it, they realize that even as kids they can be teachers and leaders and people who contribute. It can also be a good learning moment for young adults and even some older adults. We focus not just on making fencers, but on building people. We want athletes who are looking to be successful athletes to have the opportunities and resources to become that, but we want all our athletes to be people of character.

6. What are you most proud of at your club?

Recently, right before lock down, we had a boy join in with our boys class because he lived far away and couldn't attend our beginners class. He was fairly young, a little younger than would normally be in our regular class, and he had no experience. Our teenage epeeists did such a good job helping to teach him and make him feel included, that the boy's father came to me and thanked me and praised our kids for how welcome they made his son feel. The boy was so excited that he would go home and spend the week talking about the older epee boys, who he now looked up to. More recently, upon re-opening we ran some summer camps, and a few of the boys volunteered their time to help teach some of the boys who weren't quite as far along in their training. They made it a goal to catch them up and spent hours a day over a few weeks doing it in order to make their team stronger. A handful of times I've watched our athletes sit down at tournaments with youth athletes from other clubs who were crying after a loss and share stories and words of encouragement to comfort them. Sometimes they weren't even competing the same event, but would see a kid upset and would go to help them. I think that's what makes me proudest, is our members and their capacity to take care of each other and take care of others and build a sense of community through a strong sense of character.

7. Is there anything else you would like me to know about you and/or your club?

As far as the club goes, just that we're a great environment for good people who want to fence. As for me, in addition to coaching in the club and at the college you can sometimes find me posting fencing thoughts, drills, and more at blog.taketheblade.com