The Definition of Insanity is Irrational 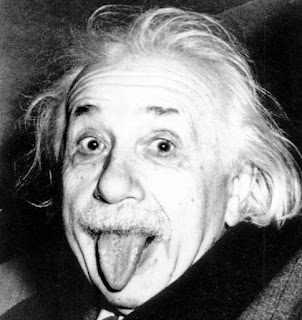 One of my youth fencers has repeated, a few times, to me “didn't Einstein say the definition of insanity is doing the same thing over and over again and expecting a different result?”

I thought that phrase was cool the first several times I heard it. As I got into the world, I gained more and more annoyance with it. As a coach, it is a particularly troublesome idea.

In my mind, insanity is not being able to discern the difference between what is right and wrong, or the inability to achieve moral culpability because of the inability to comprehend normal social restrictions. More broadly, it means to be seriously mentally ill. More colloquially, it is irrationality.

The idea that is expressed in that quote is that you're irrational if you think you'll get something different by doing the same thing repeatedly. If you walk down the street to the coffee shop looking for a Dunkin Donuts and find that it's a Starbucks, you would be irrational to continue walking there each day expecting to find a Dunkin Donuts.

There are other areas of life where this isn't irrational. I used to have a boss who would say “Isn't that the definition of insanity, doing the same thing over and over and expecting a different result?” But she'd also say “You just have to keep throwing the spaghetti at the wall until some of it sticks.”

The two sayings are in opposition. One says don't repeat your action because the result won't change, the other says keep repeating it until you get the result you want.

I think we'll find it's often the case that we should repeat things expecting a different result.

The youth fencer in question falls back on this statement when drills aren't going well, or if he is being told to drill something he doesn't think he can do.

When we practice, especially when we're drilling, it's the fact that we're doing the same thing over and over again that leads to us getting a different result. You can't build a skill without either repeatedly performing the skill or the pieces that build up to that skill. It's also pretty rare that anyone walks out onto any given field and perfectly has the skills of the game at hand with no practice, so the expectation is that everyone will spend time failing, and then continuing to fail until eventually all that failing leads to not failing.

Granted, the idea isn't to perfectly repeat exactly how we did something before. We repeat it in ways that improve it. We repeat it until it is refined and developed.

Refining isn't always a conscious process. When we're dealing with something athletic, particularly with kids, it's not always possible to just fix the problem. Sometimes it's the repetition that does it. You do the thing over and over, maybe not being able to see the difference. You slowly understand minor ways to change how you move to make it better. Sometimes you're aware of the changes, sometimes not. Frequently we'll do something and it will just feel better, or feel like it clicked, because we've unconsciously made adjustments based on our observations. We try to repeat it so it feels the same way.

When dealing with kids, they won't always have the muscle control or the strength to do something exactly correctly. They approximate it as best as they can and over time this helps build up the muscles needed, helps develop the dexterity needed, and as their ability increases they are able to do it better and better until it is correct, or workable.

The idea that because something didn't work we should abandon it can throw us off in competitions too.

I once had a fencer who in a competition sidestepped to avoid a fleche while making a parry eight and immediately riposting as the opposing fencer was passing. The referee did not award the touch. This was an error, the riposte was begun well before the pass, in fact, the fencer hit during the pass. The referee explained because the opponent finished passed him he couldn't score. The fencer was frustrated. He successfully defended against the fleche several more times, but did not attempt to score off of any of them, costing himself several potential touches.

So many people have too many missed opportunities for growth and success because we convince ourselves that the first failure is indicative of future outcomes, or because we don't recognize that sometimes success is built on repeating a failure several times, and just failing a little less each time.

That might sound bad: saying, go fail until you get good. I'm using the word failure on purpose. It's a word we think of as being really bad. But, anytime you fall short, you've failed to hit a target. You can do spectacularly well, while failing to be perfect. You can try really hard, and get something out of it, and have elements of success, while failing to do it right. When we see that we can fail and still make progress, we can be super comfortable recognizing that progress can happen amid mistakes, we can recognize success even if we fall short of perfection. We can still commit to a goal of excellence and realize that getting there happens in steps.

You can also support us through Ko-Fi. We appreciate you reading!
Coach BJ Swayne at 7:11 AM
Share