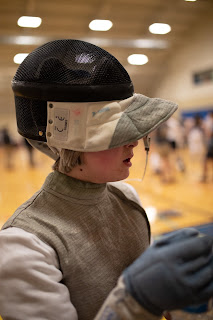 It can be really helpful to a fencer to have someone in their corner during a competition. We've all seen boxers and MMA fighters, either in real matches or in movies. They go to their corner and their coach helps keep their head in the game and reminds them of things they know but aren't thinking of, or maybe gives them insights about their opponent that they aren't thinking of on their own.

Ideally, at a big tournament, your coach will be with you. This is a lot easier to have happen at local tournaments. But, schedules running classes and tournaments might not allow your coach to go to events with you, or your coach might be working the event. For events involving travel, it may be up to the fencers to cover the costs of the coaches traveling to the event and the fee for the coaches' time at the event. If an event is far away and few of your team mates are going, the costs for this can be prohibitive.

We put this email together for our fencers and their families so parents could have some basic strip coaching advice. Getting specific advice for your athlete from their coach before going to a big event may be worth it if your athlete will respond well to a parent giving that advice. Team mates can help each other if they're at the same event, so this is a good article for athletes to review too.

The first segment is stuff athletes need to do in order to check in and warm up at an event. The second segment is about how to help coach your athlete at an event if the coach isn't there.

Things your fencer may not think of, of which you can remind them:

*Remember the fencer needs to check themselves in, and they will also need to take equipment to the armorers to be checked. Parents should be able to do the equipment check for the fencer if necessary. Vendors will be on site to sell gear if anything fails or breaks.

1. Warm up with your routine from practice, strip runs, a couple sabre sprints, stretching and some foot work practice. Grab 1 or 2 warm up bouts.

2. Drink a little water between pool bouts, even if not particularly thirsty.
3. Sit down and rest a bit when not fencing, when you're on deck, stand up, move around and stretch a little so you're warmed back up before your bout is called

5. Between DE bouts, you have 10 minutes, it works the same way as the time between pool bouts.

6. Spare cords and weapons need to be with them when they go to their pool or their DE strip

7. Watch the other fencers in the pool to preplan your approach. If you have the opportunity to watch your next DE opponent do the same.

*Youth athletes often get frustrated when parents try to give sport specific coaching if the parent doesn't also do the sport...but there are still useful things you can say to help them out.

1. Remind them to stay calm and in control

2. If they're well ahead, tell them they're doing well, to keep up their same plan, but be ready to adjust if their opponent adjusts

3. If it's close in either direction, tell them they're doing well, they can win, just to stay focused, make good choices, and watch for their opponent to adjust

4. If they're far behind, remind them that the bout isn't over, they can still adjust and come back, and whatever happens if they do their best and don't give up they've done well

5. They should drink some water on the break while you talk to them. Drinking water, and providing encouragement, keeping them calm are the main things

6. "watch your distance" if they're either missing because they're too close or too far, or getting counter attacked

7. "keep your balance" if they seem out of balance, or moving erratically

The big thing is making them feel encouraged, and keeping them calm enough to feel ok, but still focused and aggressive enough to stay in the bout.

Some kids won't respond well even to just reminders to be calm, or encouragement, even if they respond well to that normally, it might not be what they want during a competition. If they seem frustrated by it, just give them their space.

*Only one person should call things out to the fencer during the bout if anyone is doing so. It can be overwhelming having multiple voices calling at you. During the break in the DEs only one person is allowed to approach. Everyone can cheer for them and shout encouraging things though.

Thanks for reading!
For more updates like this, and ideas, thoughts, and items of interest for fencers, coaches and parents, follow us on Facebook and please share us with friends and team mates!
You can also support us through Ko-Fi. We appreciate you reading!
Posted by Coach BJ Swayne at 6:40 PM